original 1968 compilation sleeve (front/back)
Last sunday the 68 years old composer Karel Svoboda committed suicide, without any obvious or publicly known motive as it seems. I’m definitely not a friend of the vast majority of his immense work, but being probably the only Czech retro music blog writing in an easy to understand international language – i.e. not in Czech – I thought I might still honor him with one of his earliest and internationally less known compositions. Svoboda has been featured on Funky Czech-In already: for Marie Rottrová & Flamingo he wrote the outstanding pop-funk tune Kruh světla (Ring Of Light) (which I’ve translated falsely as Circle Of Light though), for Jiří Schelinger he wrote Závodník (The Racer) and likely he was involved in its production, too.
Mefisto, founded by Svoboda with the saxophonist František Kopal in 1963, used to be one of the first professional beat groups in Czechoslovakia. From the beginning they inclined more to the easy listening genre and that attitude secured them a lot of gigs and recording jobs with major Czech pop artists at times when a beat rhythm section seemed acceptable to the conservative Supraphon producers. Among their members were the later Golden Kids bass player and successful lyricist Zdeněk Rytíř or the guitarist Otakar Jahn. But Svoboda soon realized that he’s able to compose pop hits and schlagers à go-go, thus for most parts he left the beat and rock behind. In the 1970s he began to write movie and TV scores, later also musicals. Among his best known work is certainly the movie soundtrack for Tři oříšky pro Popelku (Three Hazelnuts For Cinderella). He composed lots of hits for Karel Gott, like Lady Carneval or Včelka Mája (Biene Maja/Maya The Bee). And of course in the 70s and 80s there were dozens of other Svoboda-penned pop tunes and scores that made us want to puke each time we turned on the Czechoslovak socialistic radio or TV. Yeah, Mefisto. Nomen est omen…
Svoboda’s Návrat Gemini (Return Of Gemini) from 1966 isn’t exactly funky, at least not in the intended sense. Instead it sounds more like a Shadows rip-off that’s a bit late to the party. But it’s still adequate enough for this post since there aren’t many Mefisto solo recordings anyway and this one in particular features Svoboda’s piano quite prominently. It’s not a strict instrumental, the cheesy background vocals were added by the ubiquitous Lubomír Pánek Singers & Swingers (a.k.a. Sbor Lubomíra Pánka) who appeared possibly on more Czech records than anyone else in the history of recorded music; just in my hopelessly incomplete collection of Czech vinyl Pánek shows up on not less than 116 entries in my database.
Návrat Gemini has been originally released as a single in West Germany on the Montana label. On the 10 inch mono compilation Hity Karla Svobody (Karel Svoboda’s Hits) from 1968 it sort of represents the early Mefisto era. The other seven songs are Svoboda’s best early compositions for other artists: Depeše, Nechte zvony znít and Tajuplnej hráč for Marta Kubišová, Zimní království for Yvonne Přenosilová or the nice beat ballad Stín katedrál for Helena Vondráčková and Václav Neckář. All of that stuff has been reissued on the original artists’ CDs, Návrat Gemini is available on this compilation so get it if you seriously need it.

A rose in the window 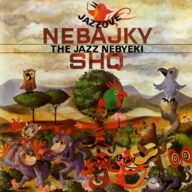